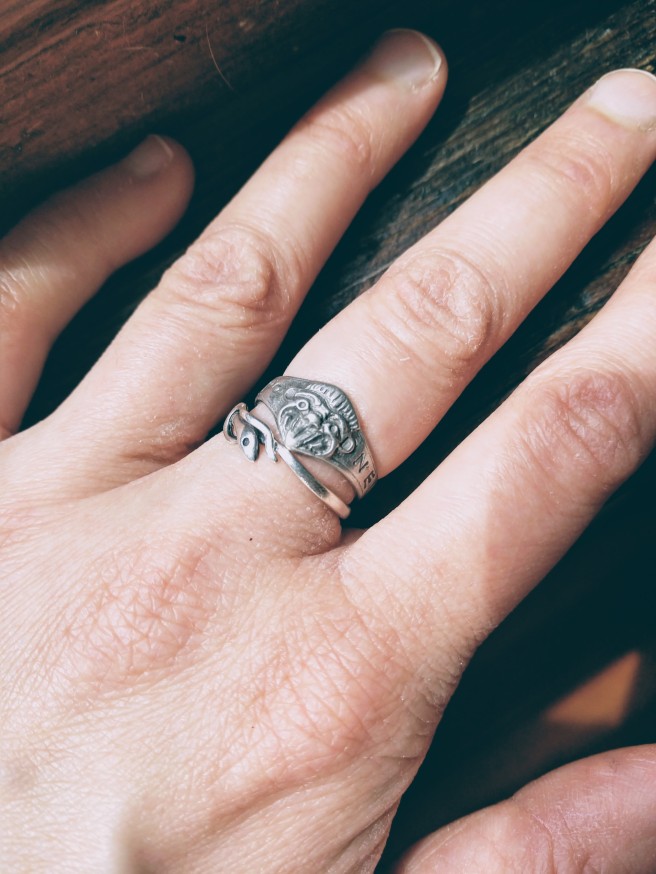 The first religious ring I wore for a Hellenic god was a ring for Apollon. I purchased it from a store in Ithaca, NY. It is a snake.

When I was younger, I was struck by the imagery of the snakes kissing Cassandra’s ears, especially since she goes on in life to not be believed. It matched many of my experiences. I also wanted something that would mark that Apollon is the god I followed — entranced by his light, I followed him out of a Wiccan framework and into a more historically-inspired, polytheistic one. My transition into Hellenic worship, as I may have said before, started when I was about twenty, and it all clicked into place when I first read Sallustius.

It wasn’t the first time I had felt that way about philosophy. I grew up UU and Neopagan simultaneously, and one of our RE coordinators was a philosophy major. She decided to teach us teens philosophy during RE, and it was the first time I was actually excited and actively engaged in learning during those Sunday classes. I had never before felt angry at my parents when we skipped service, and I enjoyed having readings and learning about the depth of possible ideas. I actually wrote my college essay for Smith about the experience. It’s also about when I started looking for 201- and 301-level Neopagan/Wiccan philosophy and found that there was very little.

The second ring is one I added last week. For some backstory, I was doing research on aōrai and gorgons for two myth-based speculative stories I wanted to write. This transitioned into a desire to actually bring more apotropaic imagery into my own life, specifically to help myself differentiate better between typical anxiety and anxiety-with-a-miasma-boost. I have lived with anxiety for a while. It started to get worse in mid-2016. Psychologically, it’s easier to deal with it when I have a good miasma-cleansing regimen. The root of what I have going on is a combination of genetics (because I have a bunch of genetic markers for anxiety) and needing to face some trauma-related things I had been avoiding. Miasma is not a cause, but high levels can exacerbate the situation — especially when my anxiety cycles are at the high water mark. So, I found a gorgoneion image on a ring on Etsy, waited for it to come in, and held an additional purification ritual when I put it on. My hope is that it helps (which seems to be the case).

Aspiring poet-contemplative. I go by Kaye Boesme, and I've written a primer on polytheism called THE SOUL'S INNER STATUES (free, online/pdf/ebook) and a chapbook of religious poetry called ACTS OF SPEECH. I've been blogging for a really long time. View all posts by kaye

3 thoughts on “My Religious Rings”