There’s nothing like making offerings to Deo and Persephone on a night when the wind is blustery and harsh against the windows and the sky is shaking with rain. 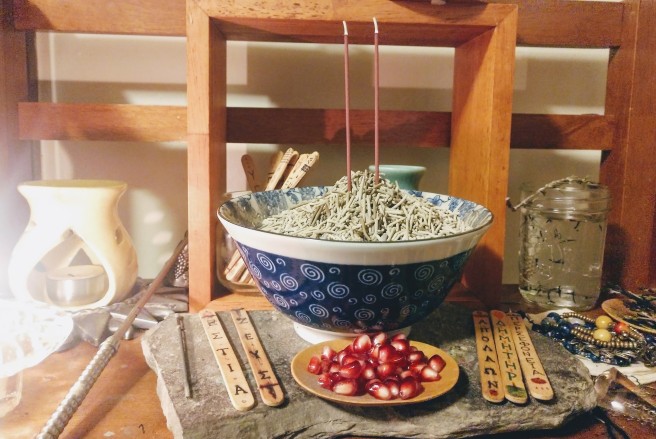 I bought some pomegranates this weekend on sale. I’ve been meaning to offer some of the seeds, so tonight, I cracked open a ripe pomegranate and gave them the first handful from the fruit.

Right now during lunch at work, I’m reading the endnotes in the newer edition of Athanassakis’ Orphic Hymns, something that’s been in my reading goals for the year. The content interweaves with D.A. Meisner’s Orphic Tradition and the Birth of the Gods, but the endnotes are also constantly making references to Proclus and other authors I’m reading. It’s nice to feel like I am starting to have a firm foundation and that things are latticing together in a way that makes sense. It’s like how, when weaving wood, you first have to soak it before it becomes pliable enough to make a shape.

Of course my phone froze when I was trying to toggle to the Orphic Hymns to Demeter and Persephone. I’m guessing it’s because I took a photo of the shrine right after placing the incense and before I had actually recited things to close out the offerings — it was as if Demeter, Divine Mother of All, Goddess of Many Names, were slapping the phone out of my hands, which I totally deserved if so (but it could have just been a coincidence 🤫). I used my hard copy of the hymns in the book instead.

One of the lines that draws me from Persephone’s hymn (#29) is brilliant and horned, which is related to the part of the Orphic fragments discussed in Meisner regarding the Hieronyman theogony, where Kore “has horns and six eyes, so she is such a frightening monster that her mother flees from her” (Meisner, 134). The endnotes of the Orphic Hymns discuss this story again. It’s a really interesting iconography that just sounds so, so beautiful when I think about how a myth like that might be depicted in art.

An average person blogging about polytheism and an aspiring poet-contemplative. View all posts by kaye